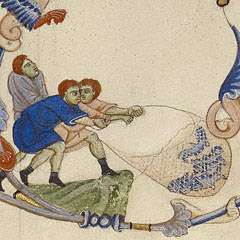 The Medieval Academy of America is currently accepting self-nominations for vacancies opening up on the Graduate Student Committee (GSC) for the 2016-2018 term. The GSC comprises five members appointed for a two- year term on a rotating basis. Self-nominations are open to all graduate students, worldwide, who are members of the MAA and have at least two years remaining in their program of study.

The GSC was founded more than ten years ago to represent and promote the participation of graduate student medievalists within the MAA and the broader academic community. In addition to fostering international and interdisciplinary exchange, the GSC is dedicated to providing guidance on research, teaching, publishing, professionalization, funding, and employment, as well as offering a forum for the expression of the concerns and interests of our colleagues. Our responsibilities, thus, include organizing pre-professionalizing panels and social events annually at ICMS Kalamazoo, the MAA Annual Meeting, IMC Leeds, and biennially at ANZAMEMS. We also run a successful and popular Mentorship Program that pairs graduate students with faculty to discuss any aspect of our profession such as teaching, publishing, finding a successful work/life balance, maneuvering the job market, and more. In addition, we seek to bring together graduate students through virtual communities such as the growing Graduate Student Group on the MAA website, Facebook, Twitter, the med-grad listserv, and this tri-annual newsletter.

GSC members are asked to attend the Committee’s annual business meeting at Kalamazoo for the duration of their term and to communicate regularly with the group via email and Skype. Ideal applicants are expected to work well both independently and as part of a team in a collaborative environment. Previous experience with organizing conference panels and social events, as well as facility with social and digital media are not required, but may be a benefit.

– A brief CV (2 pages maximum) uploaded as part of the Nomination Form;

– A recommendation letter from your faculty advisor, sent to the Executive Director of the Medieval Academy by mail or as a PDF attachment (on letterhead with signature, to LFD@TheMedievalAcademy.org).

New members will be selected by the Committee on Committees and confirmed by the Council of the Medieval Academy at the 2016 Annual Meeting in Boston, February 25-27. If you have any questions, please contact us at gsc@themedievalacademy.org.