From 19-22 September a conference in St Petersburg drew attention to Western materials in St Petersburg collections. The conference, largely organised by Professor Vladimir Mazhuga of the St Petersburg Institute of History and funded in part by the German Historical Institute in Moscow, included talks about European manuscript cataloguing projects and about particular Western items, many of which are unknown to non-Russian medievalists. The conference opened with a paper by the linguist Professor Nickolay Kazanscky on recent discoveries in Russia, including in Greek and Gothic from the Crimea and a remarkable wax tablet with a psalm text. Francesco Siri, of the IRHT Paris, talked about digitization projects, stressing that the motto of all such projects must be ‘Keine Digitalisierung ohne Tieferschließung’, in other words, digitization without proper research on what is being digitized is not acceptable. Professor Eef Overgaauw, the Keeper of Manuscripts in Berlin, gave a survey of German manuscript cataloguing since 1960, emphasizing the need to specify how much time should be spent on each manuscript and to have independent evaluation of the work by manuscript experts. Dr Patrizia Carmassi from Wolfenbüttel then showed how this worked in practice by describing her own current work on medieval manuscripts from Halberstadt, some of which are preserved in Russian collections. Reports on Austrian catalogues, on the Census of all manuscripts written in Medieval German, and on cataloguing manuscript fragments (by Thomas Falmagne who is working on the fragments in the Institute of History in St Petersburg and on manuscripts from the duchy of Luxemburg) highlighted other European projects which include material in Russia. The day ended with a magnificent presentation by a young physicist, Anastasia Povolotskaia, of her group project to recover the texts of the severely damaged Old French Legendary in the library of the Russian Academy of Sciences, using Raman spectroscopy and enhanced digital imaging to investigate pigments and parchment and to restore illegible passages. Then there was a visit to an exhibition of Byzantine and Latin manuscripts in the Russian Academy of Sciences, including an important volume of Beneventan chant and a Byzantine liturgical roll.

Friday’s session was held in the National Library of Russia and featured papers on manuscripts there, including the texts from Vivarium first published in Speculum in 1930, discussed by Fabio Troncarelli, and manuscripts of Classical authors.

Scholars of Old English will be excited by the recent discovery, reported by Professor Ekaterina Antonets, of a further leaf from the tenth-century copy of Priscian published by Neil Ker and listed by Gneuss and Lapidge. Further papers discussed the Polish and Medieval German manuscripts in the library and we met beside busts of Peter the Great and Alexander Ist  to see an exhibition of some of the treasures, passing silently through the Manuscript reading room where scholars can work until 9 pm.

The final full day met in the St Petersburg Institute of History, and started with a visit to an exhibition which included a charter of Otto 1st, papal bulls, a tenth century Italian library catalogue, and fragments of Horace and of Hrabanus Maurus from Fulda with authorial corrections, first published by Professor Mazhuga, Papers discussed legal texts, the charter of Otto, papal documents from Genua, documents relating to the Teutonic Knights, and Latin biblical fragments from Mount Athos, and there were also excellent poster presentations, including finds of manuscripts from Lübeck, Hamburg and Halberstadt transported as war trophies to Tomsk State University in Western Siberia.

On the final day we were taken into the Hermitage and shown some of their manuscript treasures, including Books of Hours of the highest quality.

The whole conference, whose proceedings are scheduled for publication, richly succeeded in revealing quite how much material of interest to members of the Medieval Academy awaits them in St Petersburg, and how excellent the quality of Russian medieval scholarship using these documents is. The conference was polyglot, many papers were in excellent English, French, or German, but the highlight was perhaps Dr Chirkova’s account of the papal documents in her collection, with captions in exquisite Latin.

We must hope that this conference will spur visits to St Petersburg, one of the world’s most beautiful cities, and generate further fruitful exchanges with Russian scholars. 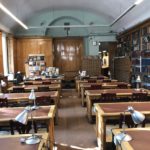 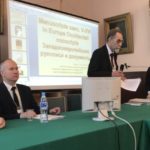 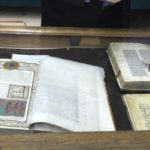 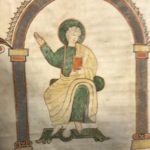 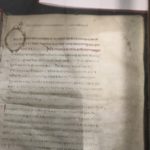