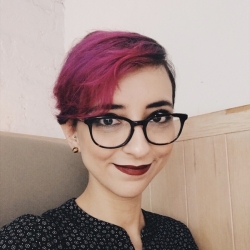 The Medieval Academy of America is very pleased to announce that the 2018-2020 Baldwin Fellowship has been awarded to Juliana Amorim Goskes (New York University), “Sharing the Throne: The Queen’s Body, Representation, and Performance (France, 1223-1435).” The Birgit Baldwin Fellowship in French Medieval History was established in 2004 by John W. Baldwin and Jenny Jochens in memory of their daughter Birgit and is endowed through the generosity of her family. The Baldwin Fellowship provides a grant of $20,000 per year for up to two years to support a graduate student in a North American university who is researching and writing a significant dissertation for the Ph.D. on any subject in French medieval history that can be realized only by sustained research in the archives and libraries of France. Juliana’s summary of her topic follows:

My dissertation, “Sharing the Throne: The Queen’s Body, Representation, and Performance (France, 1223-1435),” explores the ways that the queen’s body, as a physical and discursive entity, enabled theoretical reflections and contested ideological innovations in late Capetian and Valois France. At a time when the French body politic was going through intense conceptualization and when the king’s body was itself being manipulated for such purposes, the queen’s body was equally integral to the political language: in the descriptions of her as a bride, wife and mother; in the images produced of her and dispersed in royal and ecclesiastical circles; in the language reporting her coronation, governmental input, and public presence; and in the care for her sick and deceased body. Because it is liminal, the queen’s body is ideal for an exploration of how ideology of royal sovereignty was elaborated and put into practice. Royal but not born such, powerful but female, part of the royal family but also of her own bloodline, in the queen’s body converged her family, her husband, and her children, multipliable beyond the limits of the crown and the realm. By examining how the queen’s body becomes a French royal body, I seek to contribute a broader understanding of the spatial and material dimensions of queenly life, thereby extending the “political” to spheres that reach beyond the apparatus of royal institutions.

I argue that, despite the privilege enjoyed by texts as doorways to knowledge of the past, other forms of sign-production can be equally revealing of attitudes toward power and its constitution, and that the royal body becomes one such signifying template through interdisciplinary engagement with material culture, performance, and archaeology. For this, I follow a thematic development evoking the careers of queens rather than individual biographies. Marriage and coronation, intimate life and childbearing, public appearances and actions, cultural patronage, funerary dispositions, and commemoration by heirs and successors become key themes through which to explore how the queen’s body was spoken of and represented and how it interacted with material artifacts. This will articulate topics often explored by historians, art historians, and literary historians by considering cultural productions in their intrinsic connections with contemporary constructions of royal ideology. In addition to this, I also claim that a gendered but inclusive approach to the construction of the royal aura allows for a reconsideration of the transition between Capetians and Valois rulers following the 1314-1328 succession crises, since the growth of queenly prestige was parallel to and indeed influenced the developments of kingship, and was therefore constitutive of what it meant to be “royal.” As such, focusing on topics rather than incumbents, across the period at hand and on either side of the dynastic transition, helps visualize traditions and highlight innovations.

The support of the Birgit Baldwin Fellowship will allow me to dedicate a full academic year to research in French repositories such as the National Archives and the National Library in Paris, as well as other institutions. Queenly donations and commissions for religious institutions (through the series of ecclesiastical documents L and S of the Archives) and account records of the hôtel of the queens, alongside smaller documents signed or sealed by them (mostly through early modern copies but also in collections of originals in the BnF), are of particular importance to me at this stage of my research. Furthermore, work on secondary sources has signaled specific documents on other archival series housed in the Archives and flagged the possibility of relevant material in the departmental archives. Being in Paris will also allow me to consult objects known to have been owned by queens and manuscripts that have not been digitized (or whose digital reproduction is of poor quality and requires on-site consultation), following my interest in tracing how the queen’s body is represented and how it interacted with material artifacts. The Fellowship will thus allow me to pursue an in-depth inter-media exploration, drawing upon iconographic, artefactual, and textual sources to identify the ways that cultural and political issues raised by the presence of a female body in a predominantly male sphere shaped medieval rulership.