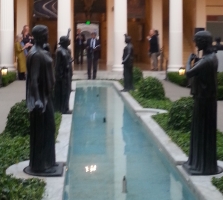 The 89th Annual Meeting of the Medieval Academy was held at UCLA from 10-12 April and was, by all accounts, a great success. More than 375 attendees heard 158 papers and three plenaries, enjoyed wine and hors d’oeuvres on the Grand Horizon Terrace, and basked in the sunshine of southern California. Special events included a tour of the Getty Center, a master class on Byzantine art, an exhibit of medieval and Renaissance manuscripts curated by Richard Rouse, and a splendid closing reception at the Getty Villa in Malibu where attendees were treated to a private viewing of the major exhibition “Heaven and Earth: Art of Byzantium from Greek Collections“. Our thanks to the UCLA Center for Medieval & Renaissance Studies and to the Getty Center for organizing and implementing such a successful gathering.

The following awards were presented at the Business Meeting:

Alice Isabella Sullivan (University of Michigan), “Monastic Architecture in Moldavia as a Site of Encounter Between Byzantium and the West”

Eileen Kim (University of Toronto), “Charitable Bequests and the Cultivation of a Spiritual Economy in the London Commissary Court Wills, 1350-1485”