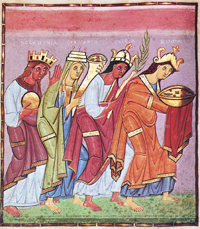 CARA, the MAA’s Committee on Centers and Regional Associations, recognizes distinction among medievalists with two awards annually. The first is the Robert L. Kindrick-CARA Award for Outstanding Service to Medieval Studies. This award of $1000 is presented at the Annual Meeting to a Medieval Academy member who has provided leadership in developing, organizing, promoting, and sponsoring medieval studies through the extensive administrative work that is so crucial to the health of medieval studies but that often goes unrecognized by the profession at large.

The second is the CARA Award for Excellence in Teaching Medieval Studies, which recognizes a Medieval Academy member and outstanding teacher who has contributed to the profession by inspiring students at the undergraduate or graduate level or by creating innovative and influential textbooks or other materials for teaching medieval subjects. This award of $1000 is also presented at the Annual Meeting.

Deadlines for nominations are 15 November. These awards, as well as the CARA scholarships, are paid for through the dues of CARA members.