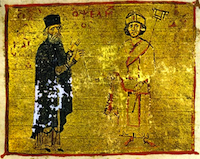 The Freeman Foundation and its founder Weston Milliken have generously offered a $10,000 matching grant to the MAA to enable the Academy to award the John Boswell Dissertation Grant annually. To receive these funds, the MAA will need to raise $10,000 by June 30th. So far we have raised $3,775 of this total with $6,255 more to go.

A successful campaign would bring the number of MAA Dissertation Grants to eight annually, each named for a prominent medievalist. The Committee for Professional Development judges this award competition.

With $5 from each graduate student member of the MAA — or $50 from each Fellow — the MAA would easily meet this challenge. We urge them and everyone in between to make a donation in any amount to support graduate-student funding and to honor the legacy of John Boswell. Online donations can be made here.

John Boswell, a medieval historian who taught at Yale University from 1975 until his death in 1994 at age 47, was a pioneer in two fields that have developed significantly over the past two decades: the study of Christian-Muslim-Jewish relations, especially in the Iberian Peninsula, and GLBT studies. His scholarly legacy is found not only in his four monographs but also in the many students, both undergraduate and graduate, who followed him into the profession. Before his death he also served on the board of the Freeman Foundation, which has now offered this matching grant in his honor.