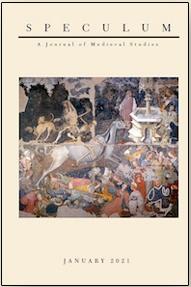 To access your members-only journal subscription, log in to the MAA website using the username and password associated with your membership (contact us at info@themedievalacademy.org if you have forgotten either), and choose “Speculum Online” from the “Speculum” menu. As a reminder, your MAA membership provides exclusive online access to all issues of Speculum in full text, PDF, and e-Book editions—at no additional charge.

Articles
Apocalyptic Ecologies: Eschatology, the Ethics of Care, and the Fifteen Signs of the Doom in Early England
Shannon Gayk

Laying the Corpses to Rest: Grain, Embargoes, and Yersinia pestis in the Black Sea, 1346–48
Hannah Barker

From One Mortality Regime to Another? Mortality Crises in Late Medieval Haarlem, Holland, in Perspective
Daniel R. Curtis

Book Reviews
This issue of Speculum features 60 book reviews, including:

George E. Demacopoulos, Colonizing Christianity: Greek and Latin Religious Identity in the Era of the Fourth Crusade
Reviewed by Nickiphoros I. Tsougarakis

Cynthia Hahn and Holger A. Klein, eds., Saints and Sacred Matter: The Cult of Relics in Byzantium and Beyond
Reviewed by Anne E. Lester

Charles Perry, ed. and trans., Scents and Flavors: A Syrian Cookbook; Nawal Nasrallah, ed. and trans., Treasure Trove of Benefits and Variety at the Table: A Fourteenth-Century Egyptian Cookbook. English Translation, with an Introduction and Glossary
Reviewed by Manuela Marín

Sincerely,
The Medieval Academy of America