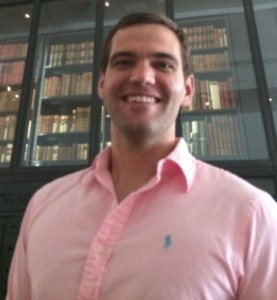 The Medieval Academy of America, in collaboration with the Richard III Society – American Branch, is pleased to announce that the 2015 Schallek Fellowship has been awarded to Samuel Rostad (University of Notre Dame) for research on his dissertation, “Benedictine Popular Preaching in Late Medieval England, c. 1350-1500.” Sam will spend his Fellowship year in England studying manuscripts of Benedictine sermons.

In summarizing his dissertation, Sam writes: “For a group of regulars normally bound to silence, the Benedictines of late medieval England were a surprisingly vocal bunch. Although popular preaching from the thirteenth century on is generally associated with friars and seculars, a large body evidence – including surviving sermons, preaching licenses, and pastoral handbooks owned by monasteries – points to the active part Benedictines played in preaching to the laity in the fourteenth and fifteenth centuries. My dissertation will draw on this wide range of evidence to provide a thorough study of Benedictine popular preaching in late medieval England, a subject which has received some scholarly attention but has yet to be explored fully. A large part of the dissertation will focus on the surviving sermons themselves and what the Benedictines actually preached to the laity, the emphases and themes of their preaching. But I am also interested in a number of related questions which will provide a fuller discussion of the topic, for instance Benedictine use of pastoral aides in their sermons and their own views on preaching and their place in the pastoral life of medieval English society. In broadest terms, I hope this study will contribute to the discussion of the place of the Benedictines in late medieval religious life. As one of the most direct lines of contact between clergy and laity, as well as its increasing prominence from the thirteenth century on, preaching offers an excellent avenue into the study of Benedictine-lay religious interaction.”