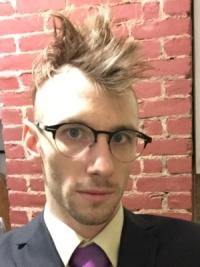 Members of the Schallek Fellowship Committee unanimously agree that the 2017-18 Fellowship be awarded to Dustin Neighly, for the dissertation project entitled ‘Nor from the Clamor of the Poor: The Common Law’s Influence on Villein Decision-Making Processes’. Neighly is a doctoral candidate in the Department of History at Rutgers University, working under the supervision of Dr James Masschaele.

The Schallek Committee reports that Dustin Neighly’s dissertation shows every promise of making an exceptional contribution to the field of medieval English legal studies. It sheds important new light on the tangled and multiple legal systems of later medieval England by exploring the strategies by which peasants and villeins not only negotiated, but also subtly altered, the literate practices associated with common-law litigation. The research plan is ambitious but feasible: Neighly explains his aims clearly and offers compelling justification for its methods, source base and overarching structure. About his project, Neighly writes:

“The legal landscape of late-medieval England encompassed a tangled web of overlapping and often competing jurisdictions. A plaintiff or defendant’s success frequently hinged upon their understanding of the complex rules which governed this network of court systems. Engagement with the law was so commonplace that even villeins, whose unfree status was grounds for having their cases dismissed from the common law system, repeatedly attempted to utilize the courts to their advantage. Moreover, when peasants did engage in extralegal actions, such as the 1381 rebellion, they routinely articulated their demands through pseudo-legal frameworks or directed their attentions toward specific legal mechanisms, such as charters or claims to Ancient Demesne.

My research examines the avenues by which England’s peasants gained knowledge of and attempted to utilize the legal frameworks that they interacted with during Edward III’s reign (1327 to 1377). I focus on how the structure of the manor court influenced peasants’ understanding of legal norms and practice, with an emphasis on how this knowledge played a role in shaping villeins’ legal strategies. I aim to re-center England’s peasants as active participants in their own legal personhood, allowing us to recover vestiges of what Paul Hyams has termed the “vernacular sense of law.” Ultimately, I seek to discover how they viewed the legitimacy of the legal power structures that suffused their public lives.

The core of my research centers on Christian Malford and Badbury, two Wiltshire villages belonging to Glastonbury abbey. I chose these villages for their wealth of primary source material and because their manorial courts coincided with hundredal courts, known as “tourns.” Additionally, both villages participated in a concerted and legally-articulated effort to acquire Ancient Demesne status in 1377. Though they ultimately failed, gaining this classification would have provided the villages’ villeins with certain legal privileges.

I used the village court rolls to create a database of names, case information, and interpersonal connections that I am using to reconstruct the social and legal networks of these villages. I hope to make this database publicly available after I complete my dissertation. I am employing methodologies honed over the previous decades by social and legal historians to ensure that I remain cognizant of the biases of the source materials, while also reaping the great wealth of information that they contain.

The support of the Schallek fellowship provided by the Richard III Society and the Medieval Academy will allowe me to expand the scope of my dissertation. I can now cross-reference the individuals in my database with those found in Wiltshire’s common law pleas for the same years, potentially allowing me to trace the legal strategies of individual peasants between both manorial and common law courts. This endeavor is made infinitely more palatable due to the hard work and generous contributions of Robert Palmer and the Anglo-American Legal Tradition website.