MAA News – From the Executive Director 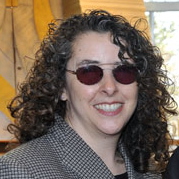 On July 1, I will officially become Executive Director of the Medieval Academy of America. As I begin my tenure, I want to share with you my vision for the Academy’s future.

In the 1926 publication Progress of Medieval Studies in the United States of America, Prof. James Willard of the University of Colorado announced the incorporation of the “Mediaeval Academy of America,” the result of five years of planning by a dozen prominent American medievalists. They couldn’t unanimously agree on the name of the organization; they couldn’t agree on the title of its journal. One thing they did agree on was the choice of the Mediaeval Academy’s first president, E. K. Rand. In the inaugural issue of Speculum, Rand expressed a straightforward vision for the new organization: “The formation in America of a Mediaeval Academy is an encouraging sign of the times…[it] will, we hope, become a rallying point for the cultivation and study of these Middle Ages.” (Speculum 1/1, p. 3). 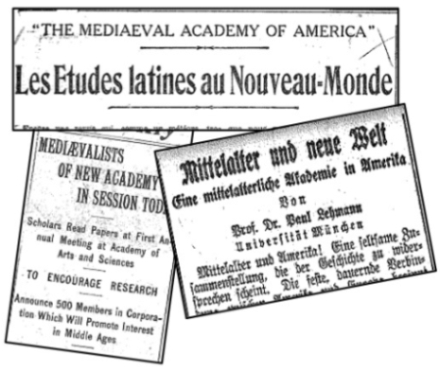 We are indeed “supremely practical,” but we are also optimists (at least, I am). In 1941, the Council of the Medieval Academy passed a resolution declaring the Academy’s intent to contribute to the war effort, not only by assisting displaced scholars and offering “special competence in such fields as linguistics, paleography and diplomatics,” but by continuing to preach “the truth of the humanities…” (Council minutes, April 1941). In the face of recent reports touting the incipient death of the Humanities, the bleak job prospects for newly-minted PhDs, the inevitable decline of The Library, we continue to preach the Truth of the Humanities. In my visits to university campuses around the country, and in my conversations with medievalists at CARA, the Annual Meeting and Kalamazoo, I have not heard stories of despair. Yes, everyone needs more funding. Yes, everyone wants to shorten the average time-to-PhD without watering down the education and training that are central to the process. Yes, everyone wants to ensure that the students we send into the world are able to find gainful and satisfying employment without compromising their personal lives. But Professor de Andria had it right. Medievalists have always faced such obstacles with creativity, innovation, compassion and intelligence. We understand the value of the Humanities. We value hard work and innovative pedagogy. We are early adopters. We understand the importance of balancing the academic and the personal. We embrace “alt-ac” and respect solid independent scholarship. And so does the Medieval Academy.

When E. K. Rand delivered his 1926 presidential address, “Mediaeval Gloom and Mediaeval Uniformity,” the Academy had 503 members and $15,000 cash-on-hand. We’ve come a long way since then, with more than 3,800 members worldwide and a significant endowment. In its 89th year, Speculum continues to be the flagship journal of medieval studies. Although we’ve lost the “æ” in “Mediaeval,” our objectives remain the same as they were in our Articles of Incorporation: “to conduct, encourage, promote and support research, publication and instruction in Mediaeval records, literature, languages, arts, archaeology, history, philosophy, science, life, and all other aspects of Mediaeval civilization, by publications, by research, and by such other means as may be desirable, and to hold property for such purpose.”

But it is no secret that the past few years have been challenging. The Medieval Academy faced financial difficulties, unanticipated leadership transitions and a painful identity crisis. Thanks to the hard work of the Council and the Finance Committee, however, I find myself taking the reins of a vastly-improved and stabilized organization. What was formerly one professional position of Editor/Executive Director is now two, enabling Speculum Editor Sarah Spence and myself to focus our energies on our specific portfolios. My job as Executive Director is to see to the day-to-day functioning of the organization and to recommend and/or implement fiscal and programmatic policy with the oversight and guidance of our program committees, Finance Committee and Council. For the past two years, the Academy budget has run at a surplus, and the current equity market has seen to it that our endowment continues to appreciate. While we have a responsibility to remain fiscally conservative, the Academy now has an opportunity to take advantage of this staffing and fiscal stability to invest our time and our treasure in the future of Medieval Studies.

The Medieval Academy has always had much to offer student members at one end of the professional spectrum and senior scholars at the other. Every year we award nearly $100,000 to support graduate students, and we count on the hard work of dozens of senior scholars serving on Medieval Academy committees to adjudicate awards and craft policy. While the original founders of the Academy were almost entirely white men from New England, the membership and leadership of the organization in 2014 is more geographically, racially, professionally, departmentally and gender diverse than ever before. The recent expansion of professional levels represented at the Annual Meeting and in the pages of Speculum demonstrates that the Academy is in fact an organization with much to offer all medievalists in all disciplines at all levels. By increasing grant and networking opportunities and encouraging a wider engagement with the Committee on Area and Regional Associations (CARA) and volunteer leadership, I hope to make the Academy of even greater relevance to all medievalists.

As medievalists around the world push the chronological, geographic and thematic boundaries of “medieval studies,” the Medieval Academy of America does as well. The scope of the 2014 Annual Meeting demonstrated the Academy’s openness to such broader, interdisciplinary definitions, and the 2015 Notre Dame meeting, with the theme “Medieval Studies across the Disciplines,” will continue this promising development. The definition of “medievalist” is changing as well, stretching beyond traditional academia to embrace alt-ac, digital humanists, adjuncts and unaffiliated scholars. The Academy will work to support these growing constituencies through outreach, moral support, mentoring, programming and funding. The newly-established Olivia Remie Constable Award exemplifies this commitment.

Our engagement with Digital Humanities continues to be strong, with Speculum accessible online, a steadily-growing library of digitized monographs, an increasing engagement with social media, and plans to develop an online database of peer-reviewed digital resources. Even so, we continue to be committed to the printed word, with Speculum always available on paper and new Medieval Academy Books in print.

Even as we look toward a promising future, programs within our bailiwick do sometimes find themselves threatened. The Academy regularly advocates for medieval studies and other humanities programs on the chopping block. As Executive Director, I intend to actively track endangered programs and positions and work with the President and with CARA to advocate for their retention. I also hope to implement programs that will support the conservation, digitization and exhibition of medieval art in North American collections, supporting the preservation of medieval artifacts while at the same time advocating for medieval studies in the public sphere.

With these and other programs in place, and with a firm financial footing and stable leadership, the Medieval Academy will be well-positioned to move into its second century as a world leader in medieval studies. I look forward to working with you to fulfill the hope expressed by E. K. Rand in 1926 and by Academy Fellow George La Piana in his unpublished 1941 ode “De Mediaevalis Academiae”: