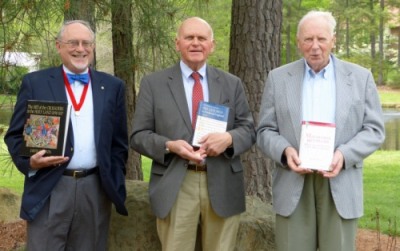 The campus of Carol Woods is located in the northern part of Chapel Hill, NC, amidst rolling hills with forests of pine trees, oaks, and dogwoods. On a 120-acre site, formerly part of the Weaver Dairy Farm, Carol Woods is now a retirement community of approximately 455 people. Founded in 1979 by a consortium of local business and university people, Carol Woods is made up of a diverse group ranging in age from 62 to 102, from many backgrounds — professional and nonprofessional — including academic, nursing, librarian, legal, business, politics, public policy, medical, social work, urban planning, technological and scientific, with about three-quarters of the population coming from North Carolina and a quarter from elsewhere in the United States. It is a very interesting group of people with fascinating life stories. Some are medievalists and at least four belong to the Medieval Academy.

In the midst of this group of interesting people, however, Carol Woods has a very unusual distinction. Three of the persons who have become residents since 2008 have also been awarded the Haskins Medal by the Medieval Academy of America. Jaroslav Folda entered Carol Woods with his wife Linda in July 2008. He was awarded the Haskins Medal in 1999, for his book on The Art of the Crusaders in the Holy Land, 1098-1187 (Cambridge, UK: Cambridge University Press, 1995), which the citation calls “a grand synthesis that touches on every aspect of art production in the Latin Kingdom.” Siegfried Wenzel moved to Carol Woods in February of 2009. His Haskins Medal was awarded in 1996 for his study entitled, Macaronic Sermons: Bilingualism and Preaching in Late-Medieval England (Ann Arbor, MI: University of Michigan Press, 1994). The citation points out how Siegfried Wenzel “merges philology and sermon studies in especially innovative and fruitful ways,” and how his “love of the word” has greatly enriched our understanding of medieval culture. And Richard Pfaff entered Carol Woods in March 2011. He received the Haskins Medal at the recent 2012 annual meeting of the Medieval Academy in St. Louis for his magnum opus, The Liturgy in Medieval England: A History (Cambridge, UK: Cambridge University Press, 2009). His citation states that “Historians of all of medieval Europe, not just medieval England, will have reason to be profoundly grateful to Richard Pfaff; … The Liturgy in Medieval England represents the crowning achievement of a long and influential career.” Professors Pfaff and Folda were both members of the faculty at the University of North Carolina at Chapel Hill, in the departments of History and Art respectively, before their retirement. Professor Wenzel taught at the University of North Carolina before joining the English Department at the University of Pennsylvania, where he was on the faculty when he won his medal.

I think it is fair to say that the director of admissions at Carol Woods, Karen Daniel, pays little if any attention to scholarly awards of this kind when admitting new residents, but she seemed quite pleasantly surprised when informed of this remarkable distinction. With three Haskins Medal award winners in residence, the fact is, however, that Carol Woods has more than many universities in the United States.  — Jaroslav Folda