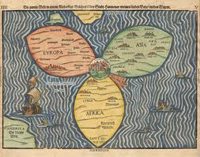 Bünting clover-leaf map. A woodcut made in 1581 in Magdeburg.

The presence of the MAA at Kalamazoo is difficult to miss when hundreds of people turn out for a 8:30 am plenary lecture by David Wallace (University of Pennsylvania) on “Conceptualizing Literary History: Europe, 1348-1418.” Three sessions on “Transnational Literary History” organized by Richard Kieckhefer (Northwestern University) and Prof. Wallace followed during the day. The events were initiated by the MAA’s Kalamazoo Program Committee, which was chaired by Prof. Kieckhefer and included Cecily J. Hilsdale (McGill University), Diane Reilly (Indiana University), and Samantha Kelly (Rutgers University).

The Medieval Academy’s Committee on Centers and Regional Associations (CARA) sponsored a workshop on “Teaching Paleography and Codicology” and a session on “Natura Nova: Ecocriticism and Medieval Studies,”both organized by Thomas A. Goodmann (University of Miami).

The Medieval Academy’s Graduate Student Committee (GSC), in addition to sponsoring a reception, sponsored a roundtable discussion on “The Canon in the Classroom” with David Wallace, Fiona Somerset (Duke University), Ian Cornelius (Yale University), and Jeffrey Jerome Cohen (George Washington University). Elizaveta Strakhov (University of Pennsylvania), chair of the GSC, organized and presided at the roundtable, which drew a very good and lively crowd.

One of the Executive Directors of the Medieval Academy, Eileen Gardiner, took part in a roundtable organized by Sally Livingston (Ohio Wesleyan University) on “Activism and the Academy.” It became a forum for a variety of positions and the starting point for a thoughtful exchange that has continued on “In the Middle” at http://www.inthemedievalmiddle.com/2012/05/activism-and-academy-forum.html.