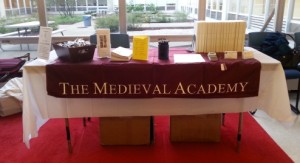 The 50th International Congress on Medieval Studies in Kalamazoo was boisterous as always, and the Medieval Academy was an active participant. Cary J. Nederman’s MAA plenary was well-attended and -received, as were the associated sessions on the theme of Tolerance and Toleration. Our three roundtables (two sponsored by CARA and one by the GSC, which also sponsored a crowded reception) covered topics of current import and sparked lively discussions about new developments in digital humanities, being a public medievalist, and medievalists in the media.

Friday’s CARA Luncheon was attended by nearly forty representatives of medieval studies programs, departments, associations, and libraries, focusing this year on small-group discussions of topics such as fundraising, public engagement, international collaboration, and curriculum development. The MAA table in the exhibit hall was the sight of impromptu meetings, recruitment of new members, and chocolate distribution. If you didn’t stop by this year, we hope you’ll visit next time!