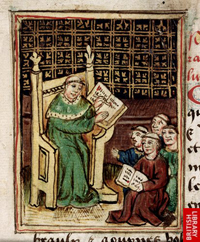 During the summer the MAA conducted a survey of members for suggestions of out-of-print books that might be added to the Medieval Academy Reprints For Teaching series.

MART now includes more than forty books essential for teaching the medieval period. Since its inception more than thirty years ago, MART has reprinted these titles, many of which are still available from the University of Toronto Press, with a portion of the revenue going back directly to the Medieval Academy.

Responses to the survey, which closed on 1 September, provided thirty possible titles. After research by the MAA staff, ten of these proved to be already available in print, although perhaps not from the original publisher. The MART Editorial Board is now considering the twenty remaining titles for possible reprint