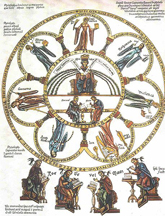 "Septem artes liberales, from the Hortus deliciarum, by Herrad of Landsberg at the Hohenburg Abbey (c.1180). (Wikimedia Commons)