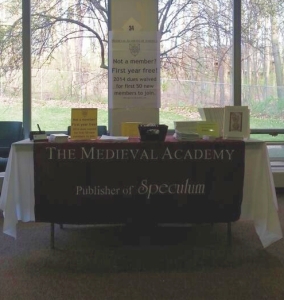 The 2014 Congress in Kalamazoo was a great success for the Medieval Academy. Susan Einbinder’s plenary on Friday morning was very well-attended and offered a striking case study of interfaith (and interspecies) interaction. The two related sessions (“Violence and Vulnerability I: Slow and  Systemic” and “Violence and Vulnerability II: Sacred and Spectacular”).  These sessions were organized by the MAA’s Kalamazoo Program Committee, comprised of Stephen Lahey, Chair (Univ. of Nebraska), Samantha Kelly (Rutgers Univ.), Sharon Kinoshita (Univ. of California, Santa Cruz) and Diane Reilly (Indiana University). The CARA and GSC sessions were also well-attended and sparked much discussion.

The Academy provided physical as well as intellectual sustenance at Kalamazoo this year. The GSC reception was a lively gathering, and the CARA lunch was attended by more than 40 representatives of departments, programs, libraries and regional associations, each of whom had the opportunity to deliver a brief report. Finally, Editor Sarah Spence and Executive Director Lisa Fagin Davis very much enjoyed meeting and speaking with the dozens of members and potential members who stopped by the Medieval Academy table in the exhibit hall, lured by chocolate but staying for conversation.