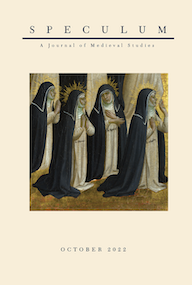 To access your members-only journal subscription, log in to the MAA website using your username and password associated with your membership (contact us at info@themedievalacademy.org if you have forgotten either), and choose “Speculum Online” from the “Speculum” menu. As a reminder, your MAA membership provides exclusive online access to the full run of Speculum in full text, PDF, and e-Book editions – at no additional charge.

“It Will Help Him Wonderfully”: Placebo and Meaning Responses in Early Medieval English Medicine
Rebecca Brackmann

Word as Bond in an Age of Division: John Eugenikos as Orator, Partisan, and Poet
Nathanael Aschenbrenner and Krystina Kubina

This issue of Speculum features more than 75 book reviews, including:

Andrew Rabin, Crime and Punishment in Anglo-Saxon England
Reviewed by Benjamin A. Saltzman