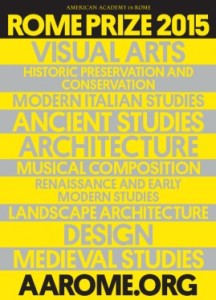 The 2015-16 Rome Prizes in Medieval Studies were recently awarded by the American Academy in Rome to two members of the Medieval Academy:

John Lansdowne (Department of Art and Archaeology, Princeton University) was awarded the Marian and Andrew Heiskell/Samuel H. Kress Foundation Pre-Doctoral Rome Prize, the first of a two-year Fellowship for dissertation research. His thesis is titled “Image Made Flesh: The Mosaic Man of Sorrows at Santa Croce in Gerusalemme in Rome.”