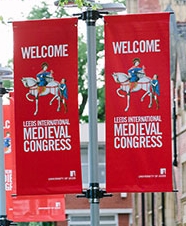 The Medieval Academy of America had a strong presence at the International Medieval Congress at Leeds this year, with a contingent that included President Ruth Mazo Karras, several Councilors, the Executive Director, and, as always, several dozen MAA members. Our plenarist, Aden Kumler (Univ. of Chicago), delivered a brilliant and well-attended lecture on Tuesday night that drew on the Congress theme “Materiality” and left the audience with much to discuss and ponder. The lecture was followed by a convivial reception. Join us next year, when our plenarist will be Carol Symes (The University of Illinois at Urbana-Champaign).