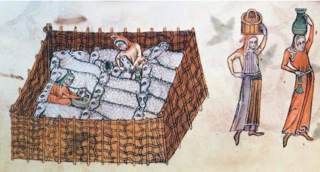 Peasants — a catch-all term for rural dwellers who made their living by farming land or raising livestock — represented about 80 to 90 percent of the population during the Middle Ages, but they rarely receive the scholarly attention they deserve. Twice in the last six years, I have had the opportunity (as part of searches for a new medievalist colleague at Fordham) to read dozens of syllabi for medieval survey courses. Both times I have been struck by how few of these syllabi even contained the word “peasant” or “agriculture.” Royalty, aristocrats, clergy, heretics, mystics, barbarians, Muslims, Jews, Crusaders, merchants, and even marginal people such as lepers and criminals make the cut, but not the social group responsible for the vast majority of the pre-industrial economy. Medieval peasants cannot rise up and shout “We are the 90 percent!” so I want to use my final presidential column to shout out on their behalf, even though they do not quite reach the 99 percent of the Occupy Wall Street movement.

I have received varied answers when asking teachers why they spend so little class time on the peasantry. Some claim to “cover” the subject (in, for example, a primary-source reading on the Great Famine, or in introducing the Commercial Revolution and growth of towns). Others answer that with only fifteen weeks in the semester, they had to make hard choices, and decided it was more important to expose students to the medieval roots of contemporary issues such as women and work or medieval multiculturalism. Still others suggest that the powerlessness of illiterate peasants make them easier to omit than kings or popes. And finally, some respond that the urban and suburban backgrounds of most of our students render the agricultural world of the medieval peasantry too foreign and seemingly irrelevant. All these are reasonable responses, but none justifies virtually obliterating such a crucial component of medieval life. Peasants were individually powerless but collectively powerful — witness the impact of new agricultural technologies on the food supply and urbanization, or peasant revolts, and even the eventual waning of serfdom. And peasants are most certainly not irrelevant in our global world, in which income inequality, agricultural productivity, and land reform are compelling and unresolved concerns.

Graduate students also need to encounter peasants in our courses. They too often have little idea of the life of the working majority in the Middle Ages. Some have been introduced to the classic manorial system of England and northern France, but few have heard anything about sharecropping peasants in Tuscany or transhumance in Spain and the Alps. As a result, graduate students are rarely interested in researching anything to do with agriculture; the cultural turn has been bad for peasants. Of almost two hundred applications that I read between 2007 and 2012 for my school’s openings in medieval history, none concentrated on peasants or agriculture. I’d like to think that the focus on cultural and intellectual history in our most recent search precluded applications from those working on rural economy and society, but given the proclivity for recent PhDs to apply widely in the field, I may be wrong. On the upside, for reasons I am hard-pressed to explain, scholarly interest in the medieval peasantry has not waned nearly as much in Europe as it has in North America.

Perhaps Europeans know how fascinating and relevant medieval peasants can be and have discovered the rich resources available to teachers in this field. New textbooks that highlight social history can provide good coverage. A recent spate of secondary works that draw on documentary evidence with “disciplined imagination” have also been written with a student audience in mind. Abundant printed translations of primary sources — ranging from court rolls, account rolls, lists of customs, rentals, and charters to archaeological and demographic sources — are readily available to undergraduates seeking material for a senior thesis. These resources make it easy to integrate sections on the peasantry into classes on women, family, lay devotion, crime, and national surveys of, for example, medieval England. For graduate students, the opportunities for comparative work, particularly between northern and southern Europe, or across the English Channel, have tremendous potential. There are also many possibilities for studies that explain regional differences in inheritance regimes, or images of the peasant in medieval literary or religious texts, or the material culture of the peasantry as evident in inventories, references to pledged goods, and archaeological evidence. In both our teaching and our research, we can and should make more use of this rich trove of scholarship and sources about the 90 percent on whom all the rest of medieval society and culture so depended.