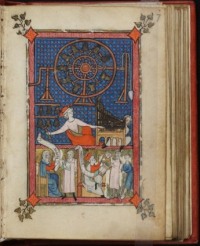 The Andrew W. Mellon Foundation recently announced a grant of $650,000 to Yale University that will allow four of its medievalists and two principal investigators (four MAA members in all) to apply the newest digital technology to various aspects of manuscript research. The four Yale researchers and their projects are:

According to Yale’s announcement, “The rapid advance of digital information technology is generating new opportunities for scholars of medieval and Renaissance manuscripts. The proliferation of digitally preserved manuscripts, together with powerful new digital technology with the potential to facilitate their analysis, will enable scholars both to pursue new avenues of inquiry and to develop novel approaches to long-standing issues in the field. In the field of medieval manuscript studies, most research during the modern era has been based on visual observations: e.g., paleographers seeking to identify scribal hands through letterforms; art historians seeking to distinguish the work of an artist through colors, designs, and styles; and textual critics looking for key variant readings in multiple manuscript texts. Today, digital technology can provide scholars of the Middle Ages with new tools that facilitate access and offer new approaches to pursue answers to long-standing questions in the field. ‘Yale researchers will benefit from advances in digital imaging and dissemination technologies’, says Meg Bellinger, director of the Yale Digital Collections Center (YDC2).

“The project will build on digitally enabled scholarship in medieval manuscripts that has been in development at Stanford University Libraries for four years. ‘Given the pioneering efforts by Yale faculty members to apply the new technology to medieval scholarship, as well as the world-renowned collections of medieval manuscripts in Yale’s Beinecke Rare Book and Manuscript Library, the University is well poised to become the center of cutting-edge research in the field,’ said Barbara Shailor, deputy provost for the arts and a former director of the Beinecke Library.

“Bellinger and Shailor will serve as principal investigators.  The project will leverage Yale’s strengths as a leading center for the study of medieval history and culture, as well as the depth of its collections.  In addition to the expertise of scholars in English, history, and computer science, the project will draw on the resources of the recently established Institute for the Preservation of Cultural Heritage housed at Yale University’s West Campus facility.

“‘Thanks to the generous support of the Mellon Foundation, the Digitally Enabled Scholarship with Medieval Manuscripts at Yale University project will realize the potential of new information technology to transform research in the humanities and humanistic social sciences,’ commented Shailor.”

The original version of this article, by Dorie Baker, appeared in the December 10, 2012 issue of Yale News.