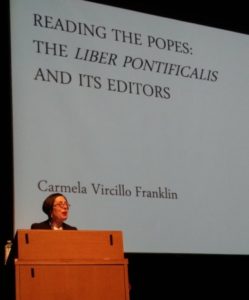 The 2017 meeting was a great success, with 468 attendees, three plenaries, fifty-one concurrent sessions, receptions in art-filled venues, and, after several days of rain and snow, two final days in the sun. The opening plenary, “The Cairo Geniza and the Middle East’s Archive Problem,” was delivered by Marina Rustow (Princeton University), who demonstrated how methodologies used to study western European manuscripts can be applied to fragmentary manuscripts of the Middle East and Asia, with stunning and innovative results. MAA President Carmela Vircillo Franklin (Columbia Univ.) delivered her plenary lecture on the editorial history of the Liber Pontificalis, focusing on Francesco Bianchini’s 1718 edition, an innovative volume that included drawings and diagrams in support of his editorial arguments. 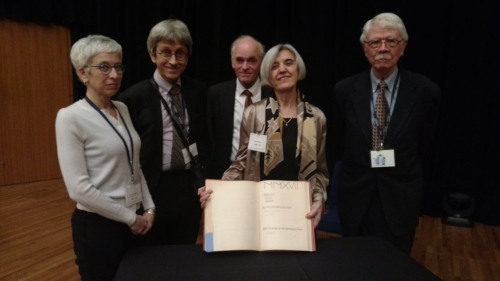 The Fellows’ Plenary was to have been delivered by Monica Green (Arizona State University). In Prof. Green’s unfortunate absence, Jonathan Hsy (George Washington Univ.) bravely stepped in to deliver her paper in her stead, while Prof. Green followed along online and answered questions that were live-Tweeted to her using #MAA2017. The CARA plenary session addressed the topic of “Mediterranean Sexualities.” Roundtables were held on the timely and important topics of open-access publishing, diversity in curricula and on campus, Medieval Studies in K-12 curricula, and careers off the tenure track. The full program is available here. 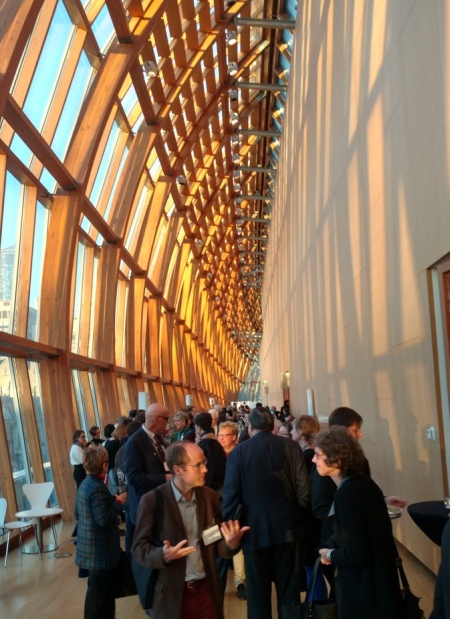 Reception at the Art Gallery of Ontario

Receptions were held at Victoria College, the Art Gallery of Ontario, and the Aga Khan Museum.

Four publication honors were awarded during the Presidential Plenary session. The Van Courtlandt Elliott Prize was awarded to Rosemary O’Neill (Kenyon College) for her article, “Counting Sheep in the C Text of Piers Plowman,” The Yearbook of Langland Studies 29 (2015), 89-116; John Nicholas Brown prizes were awarded to Jacqueline E. Jung, The Gothic Screen: Space, Sculpture, and Community in the Cathedrals of France and Germany, ca. 1200-1400 (New York: Cambridge Univ. Press, 2013) and to Jonathan R. Lyon, Princely Brothers and Sisters: The Sibling Bond in German Politics, 1100-1250 (Ithaca: Cornell Univ. Press, 2013); the first annual Digital Humanities Prize was awarded to DigiPal: Digital Resources and Database of Palaeography, Manuscript Studies and Diplomatic; and the Haskins Medal was awarded to Joel Kaye, A History of Balance, 1250 – 1375.  The Emergence of a New Model of Equilibrium and Its Impact on Thought (New York: Cambridge University Press, 2014).

The annual meeting of the Committee on Centers and Regional Associations (CARA) took place on Sunday morning and was attended by thirty CARA delegates, each of whom was there representing their program or department. The morning began with a roundtable on collaborations between scientists and medievalists (in this session, Monica Green’s paper was delivered by Patrick Geary (School of Historical Studies, Institute for Advanced Study)). Profs. Green and Geary presented on their respective paleogenetics projects. In collaboration with geneticists, Prof. Green is exploring the identification and spread of medieval pathogens and Prof. Geary is studying human migration in the early Middle Ages. Alexandra Gillespie (Univ. of Toronto) presented projects being developed in the University’s Old Books New Science Laboratory. The roundtable was followed by a discussion and brief updates from each delegate. 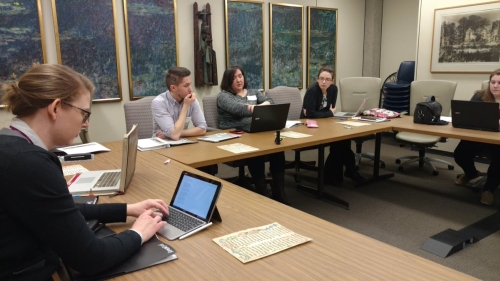 A graduate student workshop on the identification, cataloguing, and TEI-transcription of manuscript fragments took place at the Pontifical Institute of Mediaeval Studies during the Annual Meeting, a workshop that grew out of the “Digital Editing the Medieval Manuscript Roll/Fragment” workshops previously held at Yale University and University College London. These workshops were partially funded by a Medieval Academy/GSC Grant in Innovation. See digitalrollsandfragments.com for more information about this project.

We are extremely grateful to Suzanne Akbari, the Program Committee, the graduate student volunteers, the University of Toronto, and the Pontifical Institute of Mediaeval Studies for their work in organizing and implementing such a splendid meeting.  We look forward to returning to Toronto in 2027!