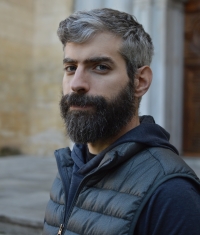 The Medieval Academy of America is very pleased to announce that the 2020-2022 Baldwin Fellowship has been awarded to Leland Grigoli (Brown Univ.), “Colonial Technologies in the Medieval Monastery: The Cistercian Order and the Centralization of Power in Champagne, Occitania, and Catalunya, 1115-1314.” The Birgit Baldwin Fellowship in French Medieval History was established in 2004 by John W. Baldwin and Jenny Jochens in memory of their daughter Birgit and is endowed through the generosity of her family. The Baldwin Fellowship provides a grant of $20,000 per year for up to two years to support a graduate student in a North American university who is researching and writing a significant dissertation for the Ph.D. on any subject in French medieval history that can be realized only by sustained research in the archives and libraries of France. Leland’s summary of his topic follows:

My dissertation focuses on how medieval monastic institutions, and particularly the houses of the Cistercian order, were integral components in the creation and propagation of structures of power. Looking at three different case studies-Champagne, Occitania, and Catalunya-I show that the success of the Cistercian Order in each region was due not only to a newfound religious zeal and more efficient economic organization, but also in particular, localized negotiations with a region’s centralizing powers. The earliest Cistercian foundations, those in Champagne, created a standard approach for securing their holdings, using their mastery of the written word to cultivate relationships of mutual obligation both upward, with counts and bishops, and downward, with local landholders, forming outposts of colonial control. Similarly, those monasteries later founded in Catalunya focused on creating similar ties with one centralizing power, the Crown of Aragón.

Such approaches, however, did not work in Occitania. The Cistercian houses there were hampered by a weak, land poor episcopacy, an entrenched local nobility who were already patrons of local monasteries, and a sophisticated notarial culture with an entirely different relationship to the written word than that found in the north. Much of Occitanian Cistercians’ behavior in the lead-up, execution, and aftermath of the Albigensian Crusade was part of their efforts to overcome these difficulties. Cistercian monasteries in the Midi drew their monks not from the disinterested local nobility, but from the newly-ascendant ranks of wealthy tradesmen and burghers. Unable to gain support from the region’s bishops, they convinced the papacy to depose them and elected Cistercian monks to Occitanian sees. Failing to find any regional centralizing powers interested in their cause, they offered themselves as local mediators to the kings of England, France, and Aragón, each of whom claimed Occitania. And against the notaries and consuls, as well as to all of these other ends, Cistercians deployed the language of heresy.

Following Capetian intervention in the crusade, the Order did not simply fade back into the countryside and allow the new mendicant orders to take up their banner. Profiting handsomely in both coin and land from their role as mediators at the Treaty of Paris, Occitanian Cistercians worked with the region’s new Capetian rulers to concentrate the region’s “heretical” peasantry into new towns or bastides, a policy with striking similarities to the Spanish empire’s reconcentración of aboriginals in the New World. By the reign of Philippe le Bel, the Midi was a Capetian colony, its productive rural expanse administered by the Cistercian Order.

The historiographic impact of this argument is twofold. First, it provides a new narrative for understanding not only Cistercian engagement in crusade and conquest in Occitania, but the phenomenal success of the Order itself over the twelfth and thirteenth centuries. Second, it serves as a corrective to the common narrative which sees secular and religious authority as opposing (or at least highly distrustful) forces in the course of the creation of medieval states, emphasizing the important role of monastic history in the slow centralization of power following the Carolingian collapse. This project thus provides new avenues for studying the interactions between secular and religious spheres in the medieval and early modern world.