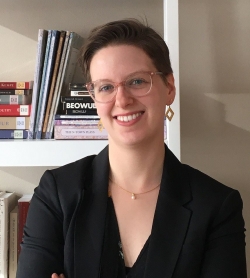 The Medieval Academy of America is very pleased to announce that the 2020-2021 Schallek Fellowship has been awarded to Julia Mattison (Univ. of Toronto), “C’est livre est a moy: French Books and English Readers in Fifteenth-Century England .” The Schallek Fellowship provides a one-year grant of $30,000 to support Ph.D. dissertation research in any relevant discipline dealing with late-medieval Britain (ca. 1350-1500). The Fellowship is offered by the Medieval Academy in collaboration with the Richard III Society-American Branch and is supported by a generous gift to the Richard III Society from William B. and Maryloo Spooner. Julia’s summary of her topic follows:

My thesis traces the relationship between the French language and its material form in books in England, c. 1380-1509. Focusing on physical books, I investigate how audiences interacted with these Francophone objects. This interaction was not always through reading as conventionally defined: French books could be luxury objects, subjects of literary interest, linguistic resources, family heirlooms, or useful sources of information. Rather than emphasizing Anglo-French literature or the influence of continental French on Middle English literature, I foreground the codicological study of French manuscripts in England at scale. After extensive primary research in libraries in France, the UK, and the United States, I have compiled a database of hundreds of manuscripts in all dialects of French, which forms my corpus of investigation. I examine these manuscripts for their linguistic, literary, and social value to English audiences through the application of paleographical practice and literary and visual analysis of marginalia, layout, binding structures, illuminations, and other aspects of books. Ultimately, I consider the multilingual English readers of French books in order to re-evaluate our understanding of national boundaries, language use, and literary production.

The thesis argues that manuscripts in French-both insular or continental-allowed English readers to formulate a conception of language, and provoked a series of reading practices that united disparate texts and manuscripts through their shared language. Beginning with an analysis of descriptions of books in French in historical records, such as wills and inventories, I move through a series of chapters that examine the reading and interpretation of French books from single words to the codex’s form. The significance of this project is myriad: I perform the current largest study of all French books-especially those of continental origin-known to have been in fifteenth-century England and their reading practices. I engage with recent linguistic and literary analyses of the French of England to demonstrate how manuscripts provide evidence for the lived role of language. Furthermore, I expand our knowledge of medieval reading strategies and argue that French books prompted certain reading practices among English readers. And finally, I show the importance of language in conceptualizing the idea of the book, demonstrating how the multilingual environment of late medieval England proved significant for developing a connection between language and its material instantiation.